NATIONALITY IS THE ORDER OF THE DAY!
Na∙tion∙al∙i∙ty ​noun 1. the state of belonging to a particular nation. 1a. distinctive national or ethnic character. 2. an ethnic group forming a part of one or more political nations.

Black's Law Dictionary - 4th Edition
We are going to look at the definition of nation shortly, but first let's get an understanding of the importance of having a nationality.

* It is important to note that the word status in the Black's Law Dictionary's definition is italicized. To have a better understanding of nationality, we must now also understand the definition of status, and what it means in relation to an individuals nationality. 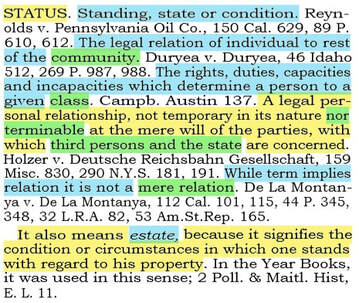 Black's Law Dictionary - 4th Edition
We can see that status is very important and has various meanings. Let's examine them before we move on.

Status means Standing, state or condition. It also means the legal relation of individual to the rest of the community. The rights, duties, capacities and in-capacities which determine a person to a given class. The legal personal relationship, not temporary in its nature nor terminable at the mere will of the parties, with which third person's and the state are concerned. While term implies relation it is not a mere relation. It also means estate, because it signifies the condition or circumstances in which one stands with regard to his property.

We can see that status as it relates to nationality is very important because it determines the condition of an individual as it relates to their STANDING, state or condition. Standing (at law) is the term for the ability of a party to demonstrate to the court sufficient connection to and harm from the law or action challenged to support that party's participation of that case. So your Standing (at law) is based upon your own competency.

The word standing is very important in regards to "the language of the law" as it is, from my understanding from my research of the law, that Noble Drew Ali registered The Moorish Holy Temple of Science as the Moorish Science Temple of America as a religious organization in May of 1928. It wasn't because The Moorish Holy Temple of Science was now a "religious organization", it was due to Noble Drew Ali's understanding of the First Amendment of the United States Constitution. The First Amendment prevents the government from making laws that would prohibit Moorish Americans, from establishing and exercising our religion of Islamism, our rights to freedom of speech, freedom of the press, to peaceably assemble, and to petition the government for redress of grievances for being directly or indirectly affected by a foreign government statute. The Prophet was acting to further protect indigenous Moorish people of Northwest Amexem (America).

We can also see that your standing, state or condition can determine your rights, duties, capacities etc., and can determine you to a given class. Basically, according to your own competency to demonstrate and prove you are who you say you are, you can be relegated to a given class (status) by another jurisdiction. Which is not good, in any sense, at any time.

We can also see that status is a legal relationship, that is not temporary in its nature nor terminable at the mere will of parties, with which third parties and the state are concerned. So status also gives you further protections from third parties (creditors) and from the state.

We can also see that status implies relation, but not a mere relation. A mere relation suggests that ones relation to whatever was meager or minimal. Not having much claim. So one's status is is important also because it leaves no doubt as to one's condition.

We can also see that status also means estate, and estate and state are synonymous (interchangeable). This deals with one's condition in regards to their property. Moorish Americans are indigenous to the Americas', and by birthright are the true inheritors of the land. So we can also see that your status ties you to your estate.

There are many other terms that could be broken down so that you may get a broader sense of the totality of what is being discussed, however I don't want to lose you by jumping all around. Next will will look at the definition of nation so we can better understand why it is important to understand nationality is so important, not just for Moorish Americans, but for all peoples of the world.

By understanding what a nation is, you will begin to understand why colorable titles such as "black", "negro", "African American", "Indian", "Native American",  and other Nom de guerre (war names) are deceptive tactics used to denationalize the "de Jure" people of the land.
We can see that Nation is defined as a people, or aggregation of men, existing in the form of an organized jural society, usually inhabiting a distinct portion of the earth, speaking the same language, using the same customs, possessing historic continuity, and distinguished from other like groups by their racial origin and characteristics, and generally, but not necessarily, living under the same government or sovereignty.

Here is why... there is NO NATION called Black! There is no land on the distinct earth called Black where so called "Black" people originated. Although we originated all over the earth (land) at a time before the landmass separated, we had distinct names, customs, languages, history and characteristics that set us apart from other people.

From time immemorial we learn of the Canaanites, the Moabites, the Amorites, the Hittites, etc., people who have distinct identities and who are known for such even in modern times. At no time in the historical record did ever a Black nation exist. When black is used to describe our people, it is in relation to our complexions... not our identity. Black is an adjective. An adjective modifies or describes a noun. The noun would be people, however since there isn't a nation on the earth(land) called Black, where black people originate, the term black people is a misnomer (colorable term) that isn't in reality what it's purported to be... meaning... just because your you have a dark complexion doesn't mean you're black. 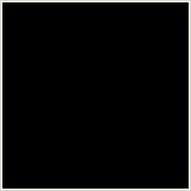 This is the color Black.
Honestly... are you this color?
Now that we know a nation is a people, or an aggregation of people... let's examine what a National is in relation to a citizen.

A National is defined as pertaining or relating to a nation as a whole. It goes on to say that the term is commonly applied in American Law to institutions, laws, or affairs of the United States or its government, as opposed to those of the several states.

This section of language carries heavy implications as it can be used very loosely or broadly, however we see that the term "national" as used in the phrase "national of the United States" is broader than the term "citizen". So we can see that a national is considered to have a higher standing than that of a citizen.
This is why the Prophet said that if you do nothing else, DECLARE YOUR NATIONALITY!
Your nationality places you among the affairs of men. Without it your status is dead or civiliter mortuss (civilly dead) in the eyes of the law. Without nationality you have no standing (at law)​.